Stress is the response of the animal body to a stimulus. This stimulus is not always negative. However, when it is associated with negative situations, the decline of performance and productivity is inevitable, as animal health is affected, especially in their early days of life.

At birth, piglets are neurologically developed but physiologically immature. In terms of nutritional reserves, they are born with only 1 – 2% fat, which is mostly structural. In their first hours of life, these animals rely solely on the catabolized glucose of liver glycogen as their primary source of energy.

There are many stress factors for piglets in the early days of life, starting with birth. The liver glycogen level at birth is only enough to cover the energy demand of 15 – 20 hours after birth. When there is no artificial heating, piglets, especially those that are not breastfed, become hypoglycemic and seek warmth from their mother. Because of this, they are often crushed. For this reason, the delivery should be accompanied whenever possible. Also, some postpartum care should be taken to ensure the survival and health of the litter, such as adequate temperature, correct navel disinfection, preventive medications, among others.

Weaning is another complex period for piglets. Stressing factors mainly involve the new environment, the new social interaction, and the diet change. The consequences of this stress can lead to large production losses. Commercial weaning occurs between 17 and 28 days of age when the piglet’s immune system is still immature, and its circulating antibodies reach the lowest levels (at around 28 days). This period is called the “immunity gap” or “post-weaning gap”, when the piglet is more susceptible to intestinal problems because its acquired immune system is not fully developed yet. After that, the level of antibodies gradually increases as the animal develops its natural immunity.

At birth, piglets passively receive their mother’s antibodies through the ingestion of the colostrum, and absorption of antibodies depends on the absorption capacity of the intestinal epithelium, which begins to decrease after 24 to 36 hours after birth. That means that the environment, nutrition, health, and general condition of sows will directly impact newborn and post-weaning piglets, as the development of piglets directly influences them during pregnancy, postnatal physical contact (microbiota transmission) and colostrum and milk during lactation. It is important to remember that the longer the period between birth and the first breastfeeding, the greater the chance of an infection occurring.

The colostrum has a high concentration of total solids and proteins, but low levels of fat and lactose. It also contains high levels of immunoglobulin (IgG, IgA, and IgM), and the concentration decreases over lactation time. There are some other immune system cells in the colostrum and the milk, including neutrophils, lymphocytes, macrophages, and mammary gland epithelial cells, as well as leukocytes that stimulate the development of cellular immunity in newborns. Thus, it is easy to understand that the health condition of the sow will have a direct impact on the transmission of passive immunity to piglets.

The digestive system of the piglet has some limitations, such as insufficient enzyme secretion, hydrochloric acid, bicarbonate and mucus, factors that interfere with adequate digestion and absorption of nutrients. The stress of switching from milk (highly digestible) to solid food (more complex and less digestible) may result in reduced food and water intake. About 50% of weaned piglets consume the feed within 24 hours after weaning, and 10% start feeding 48 hours after weaning.

When there is a low dietary digestibility, which is often associated with ingredients’ quality, pathogenic bacteria proliferate. These bacteria use these ingredients as substrates to multiply, thus resulting in enteric problems, such as diarrhea, which causes a huge decrease in performance and high mortality rates in the early days. Consequently, in the period of 7 to 14 days after weaning, intestinal microbiota undergoes major changes in its composition, generating a competitive resistance or exclusion.

In the market, we can find natural additives that can provide compounds that stimulate the body to respond more efficiently to stressful stimuli imposed by the field. Nucleotide supplementation through diet has been studied in several species, and although they are not considered essential nutrients, these additives play an important role in various metabolic processes, especially in the tissues of the body and in stages of animal life that demand a large amount of energy due to high cell multiplication.

Enterocytes can readily absorb free nucleotides and nucleosides in the intestine. They are especially important for rapidly multiplying tissues and for the limited de novo pathway synthesis capability (major nucleotide production pathway), such as intestinal epithelial cells, blood cells, hepatocytes, and immune system cells (Figure 1). They are then used by the salvage pathway when the body can synthesize less energy-consuming nucleotides as it will recycle the bases and nucleotides of the metabolic degradation of dead cell or dietary nucleic acids. However, when endogenous supply is insufficient, nucleotides from exogenous sources become semi-essential or “conditionally essential” nutrients. And this occurs mainly in animals going through the fast-growing (early stages), reproduction, stress and challenge stages.

Figure 1. Nucleotide digestion and absorption in the gastrointestinal tract (HUNG, 2015). 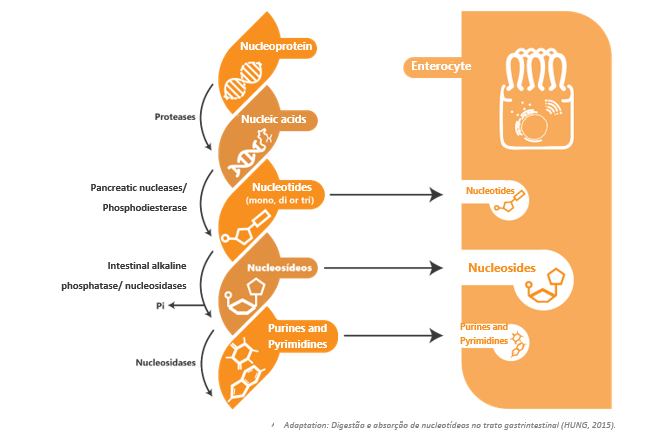 A study by Vitagliano et al. (2014) evaluated the effect of diets supplemented with Hilyses® for sows at 4 inclusion levels (0, 4, 8, and 12 kg/ton). Supplementation occurred from three days before lactation until the piglets were 21 days old (at weaning). The number and the bodyweight of piglets at birth were equalized by sow and treatment (number of piglets per sow: 10.48. Piglet initial weight: 1.70 kg. Litter/sow weight: 17.79 kg).

Table 1. Total RNA concentration (mg/mL) in colostrum and in the milk of sows fed diets supplemented with Hilyses®.

Ensuring adequate management, nutrition, and health program during pregnancy, delivery, postpartum, and weaning is an essential method for ensuring good performance of piglets, since mitigating stress factors will determine the balance between immunity and performance. Therefore, supplementing pregnant and lactating sows’ diets with natural additives that provide adequate support for piglets to better respond to challenges and stressful stimuli imposed by the field is essential to rearing systems. In addition to being a natural source of free nucleotides and nucleosides, which are extremely important for phases of high cell multiplication, Hilyses® provides amino acids, peptides, and short-chain polypeptides and glutamine, MOS and high levels of β-glucans, thus providing great benefits to animal nutrition and health.

HILLMAN, K. (2001). Bacteriological aspects of the use of antibiotics and their alternatives in the feed of nonruminant animals. In Recent Advances in Animal Nutrition, P.C. Garnsworthy, J. Wiseman, eds. (UK: Nottingham University Press), pp. 107–134.