Stress is the response of the animal body to a stimulus. This stimulus is not always negative. However, when it is associated with negative situations, the decline of performance and productivity is inevitable, as animal health is affected, especially in their first week of life. Many stress factors affect poultry, such as transport from the hatchery to the farm and fasting on the move, transition from yolk sac feeding to a solid diet, pathogenic microorganisms, temperature variation, the environment, among others.

Poultry has a rapid growth curve due to the behavior of hyperplasia and hypertrophy. These characteristics are due to advances in genetic improvement, nutrition, and health, which make them short-period rearing animals. In such a manner, the inadequate development of poultry from one to 21 days of age may compromise their whole life, as they have a short rearing cycle and compensatory growth is improbable.

Thus, the first week after birth is decisive for these animals because it represents the period in which they present the highest growth rate concerning their lifetime. Due not only to their short life span but also to the positive relationship between body weight at seven days and weight at slaughter age, performance and development at this stage are critical.

At birth, chicks have the digestive tract anatomically developed, but physiologically immature. Therefore, this period requires special attention so they can absorb all the nutrients and antibodies contained in the yolk sac and start a solid diet, allowing the digestive tract to develop completely.

In addition to being important for digestion and absorption of nutrients, digestive tract maturation is extremely essential for the proper functioning of the immune system, since approximately one quarter of the intestinal mucosa of poultry is composed of lymphoid tissue, and over 70% of it is composed of immune system cells, including unorganized or dispersed cells (lamina propria, leukocytes, and intraepithelial lymphocytes) and of highly organized lymphoid follicles (Peyer’s patches, where IgA and B lymphocytes are generated). Gut-associated lymphoid tissue (GALT) is the largest component of mucosal-associated lymphoid tissue (MALT), and it is a significant source of immune cells that monitor and protect the intestinal mucosa layers. GALT is continuously exposed to food antigens, microbiota, and pathogens.

It is worth emphasizing that the digestive system maturation (especially enzyme production) occurs until the third week of life. Therefore, providing the best possible conditions for this early growth and development is essential, as environmental and dietary challenges will determine the balance between immunity and performance.

Understanding the importance of the first week of life and why stressful stimuli directly influence health is essential for us to provide the necessary support for poultry so that they can express their maximum performance potential throughout the rearing period. Thus, it is important to perform the practices in the rearing process correctly, such as proper management, checking the health of the farm, complying with the vaccination program, paying attention to sudden changes in temperature and humidity of the barn and providing a balanced feed with good quality ingredients and natural additives. These practices directly interfere in the health of chicks in the initial stage, being able to soften the stressful natural stimuli these animals are subjected to.

In the market, we can find natural additives that can provide compounds that stimulate the body to respond more efficiently to stressful stimuli imposed by the field. Nucleotides supplementation through diet has been studied in several species, and although they are not considered essential nutrients, these additives play an important role in various metabolic processes, especially in the tissues of the body and in stages of animal life that demand a large amount of energy due to high cell multiplication.

Enterocytes can readily absorb free nucleotides and nucleosides in the intestine. They are especially important for rapidly multiplying tissues and for the limited de novo pathway synthesis capability (major nucleotide production pathway), such as intestinal epithelial cells, blood cells, hepatocytes, and immune system cells (Figure 1). They are then used by the salvage pathway when the body can synthesize less energy-consuming nucleotides as it will recycle the bases and nucleotides of the metabolic degradation of dead cell or dietary nucleic acids. However, when endogenous supply is insufficient, nucleotides from exogenous sources become semi-essential or “conditionally essential” nutrients. And this occurs mainly in animals going through the fast-growing (early stages), reproduction, stress, and challenging stages.

Figure 1. Nucleotide digestion and absorption in the gastrointestinal tract (HUNG, 2015). 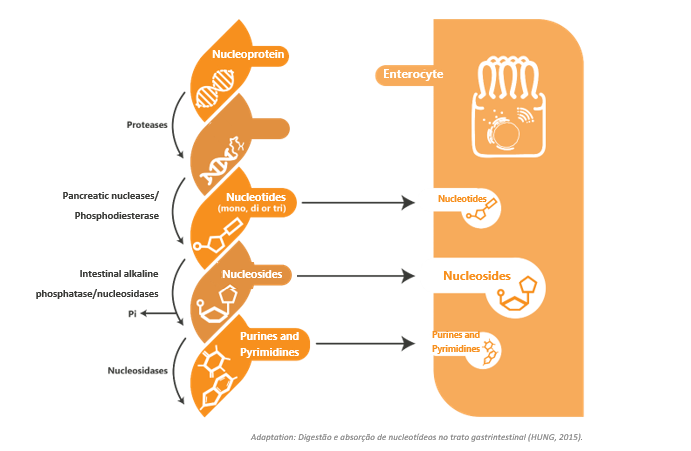 A great choice for a natural exogenous source of free nucleotides and nucleosides is Hilyses®, which is obtained through the processing of Saccharomyces cerevisiae yeast, used in the fermentation of sugarcane to obtain ethanol. The process consists of cell autolysis (cell membrane rupture), where intracellular content is leaked, and after this process, some specific enzymes are added for the hydrolysis (“breakdown”) of RNA into nucleotides and nucleosides (which form the nitrogenous bases of the structure). This end product is highly digestible, as it also has amino acids, peptides, and short-chain polypeptides and glutamine; therefore, it is highly recommended for animal nutrition. There is also the presence of mannan oligosaccharides (MOS, which is an effective tool against Salmonella and E. coli.) And high levels of β-glucans (immunomodulators that stimulate the innate immune system for a faster and more effective response).

A study conducted by Bonato et al. (2016) in Southern Poultry Research (Athens, USA) evaluated the effect of supplementation with Hilyses® on broiler diets (1 kg/ton up to 14 days and after 0.5 kg/ton up to 42 days) on performance up to 42 days of age. Hilyses improved feed conversion of poultry at 28 and 42 days of age when compared to the negative control (Graph 1).

Similarly, another study by Rivera et al. (2017) conducted at the Universidade de São Paulo (Pirassununga Campus, Brazil) using a reused poultry litter from a commercial farm found that the addition of Hilyses® (1 kg/ton up to 7 days and 0.5 kg/ton up to 42 days) also resulted in improved feed conversion at 42 days of age when compared to the negative control group.

The greatest growth and development of the poultry digestive system occurs in the early phase. These are important not only for digestion and nutrient absorption but also for the immune system as a whole since most immune cells are concentrated in the intestinal mucosa. This whole set is key for the proper functioning of the other systems of the body, especially in the first week of life and it can ensure health and performance throughout rearing.

Supplementing diets with natural additives that provide adequate support for poultry to better respond to challenges and stressful stimuli imposed by the field is essential to rearing systems. In addition to being a natural source of free nucleotides and nucleosides, which are extremely important for phases of high cell multiplication, Hilyses® provides amino acids, peptides, and short-chain polypeptides and glutamine, MOS and high levels of β-glucans, thus providing great benefits to animal nutrition and health.

RIVERA, J. A., 2017. Effect of hydrolyzed yeast and yeast cell wall as alternatives to zinc bacitracin

on the performance of broilers from 1 to 42 days. In: 2017 Poultry Science Association Annual