Basic ingredients and dietary supplements such as Saccharomyces cerevisiae yeast can have functional properties in the diet and yield satisfactory results when added to the feed as active cells, (autolyzed or hydrolyzed) inactive cells or as cell wall components.

It is known that the fermentation environment that will actually provide the fundamental differences in product final composition is more important than yeast strain. The strains used in sugarcane processing to obtain ethanol will result in a product with higher concentration of β-glucans. Yeast culture goes through numerous fermentation cycles, which makes cell wall denser, resulting in higher carbohydrate rates and lower fat content, making it less digestible in the gastrointestinal tract.

With the restrictions imposed by regulations in Brazil and abroad, as well as the demand of the consumer market for natural and healthy products in animal feed, several alternatives have been tested and used in the animal industry. However, many factors are considered by producers to obtain the highest cost-effectiveness, such as the action of these compounds on animal metabolism.

Natural additives found on the market are capable of providing compounds that stimulate the body to respond more efficiently to the stressful stimuli imposed in the field. Among the options available, ImmunoWall® and Hilyses® stand out for being natural Saccharomyces cerevisiae yeast-based products, with no use restrictions to any animal species. 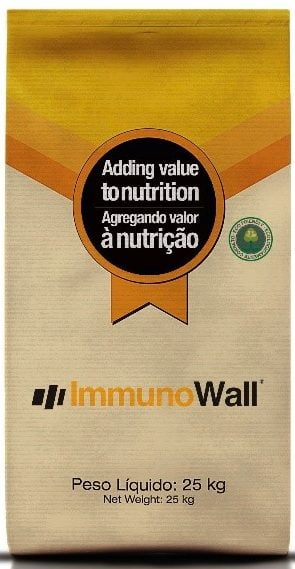 ImmunoWall® is composed of Saccharomyces cerevisiae cell wall, and contains a high concentration of β-glucans (> 35%) and mannan-oligosaccharides, MOS (~ 20%). Due to the processing conditions to which cells are subjected, the wall becomes denser compared to other yeast cell walls on the market. This yeast cell wall structure is resistant to degradation by digestive tract enzymes and bacteria, and its resistance to digestion in the gastrointestinal tract and to fermentation in the large intestine are one of the main criteria for its use as prebiotic. Prebiotics are considered excellent contributors to animal health because they stimulate the immune system and contribute to intestinal mucosa integrity, prevent adhesion of enteropathogenic microorganisms, and have the ability to bind and inactivate mycotoxins in the intestinal lumen.

β-glucans are considered immunomodulators that improve immune response effectiveness and agility in animals. These polysaccharides are natural and effective stimulants of the innate immune system, and phagocytic cells, when in contact with β-glucans, are stimulated, producing cytokines. Cytokine production provokes a “chain reaction”, improving animal immunity and allowing the body to fight opportunistic infections. One of these immune system reactions is the increased number of goblet cells responsible for mucus production. With increased mucus production and release in the intestinal lumen, the mucosa (villus protection barrier and the medium that allows the action of various enzymes) increases, providing greater protection to intestinal cells and villi.

Dietary nucleotide supplementation has been studied in several species, and although not considered essential 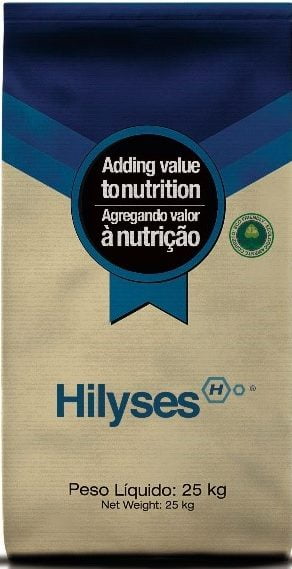 nutrients, these additives play an important role in various metabolic processes and, in particular, in some body tissues and stages of animal life characterized by very high energetic demand due to high cell multiplication.

Free nucleosides and nucleotides can be immediately absorbed by enterocytes in the intestine, and are especially important for rapidly multiplying tissues and due to limited de novo synthesis (major nucleotide production pathway), such as intestinal epithelial cells, blood cells, hepatocytes and cells of the immune system. And this occurs especially in animals undergoing fast growing stages (early stages), reproduction, stress and challenges.

Hilyses® is a great natural choice of exogenous free nucleosides and nucleotides, obtained through the processing of Saccharomyces cerevisiae yeast used in the fermentation of sugarcane to obtain ethanol. The process consists of cell autolysis (cell membrane rupture), where intracellular content is extravasated, and after this process, some specific enzymes are inserted for hydrolysis (“breakdown”) of RNA into nucleotides and nucleosides (which form the nitrogenous bases of the structure). This end product is highly digestible as it contains amino acids, peptides and short-chain polypeptides and glutamine, and is highly recommended for animal nutrition. It also contains mannan-oligosaccharides (MOS, an effective tool against Salmonella and E. coli.) and high levels of β-glucans (immunomodulators that stimulate the innate immune system for a faster and more effective response).

Supplementing diets with natural additives that provide support for animals to better respond to the challenges posed by the field is fundamental in farming systems. ImmunoWall® and Hilyses® act as prophylactic agents, increasing animal resistance, minimizing contamination and high mortality rates, and improving weight gain and health. In highly challenging environments, such as in intensive animal production, strengthening the immune system is crucial for greater productivity gains.

The use of Hilyses® in pre-starter diet is indicated, followed by ImmunoWall® until slaughter.

Hilyses® is indicated during the first 3 weeks until the pre-laying period. As early as the laying period; if the goal is to seek improvements in egg production and incubation parameters, improved chick quality and reduced mortality during the first week (progeny effect), we recommend the use of Hilyses®. However, if improvements in immune system responses and pathogen control are sought, then we recommend using ImmunoWall®.

We recommend the use of Hilyses® in the nursery phase as a functional ingredient, seeking immune system strengthening, pathogen control, mortality reduction and improved growth. During this phase, it is also possible to include Hilyses® as a protein and amino acid source ingredient, formulating in the diet and substituting a protein source. During the growth and termination phase, we recommend the use of ImmunoWall® for pathogen control and immune enhancement due to challenges.

We indicate the use of Hilyses® during pregnancy and lactation – seeking transfer of benefits to piglets (passive immunity, nutrients, nucleotides) – especially reduced mortality during the lactation phase.