Currently, there is an increasing trend in finishing cattle in feedlots because cattle may be slaughtered at an early age, there is greater carcass yield, better quality meat, the possibility of intensive exploitation on small properties, and a faster return on working capital invested in fattening. However, this production trend causes some changes in handling, including animal transport, diet alterations, and crowding of animals in more restricted spaces, all of which generally result in performance and immunity deficits that favor the occurrence of diseases (FULTON et al., 2009).

Among these diseases, the respiratory ones are most common in cattle in feedlots; they represent 56% of diseases, both in Brazil and abroad. Such diseases cause decreased feed efficiency, including increased production costs due to loss of herd health, poorer carcass quality, and even animal death. These deficits produce notable annual economic losses (EDWARDS, 2010).

In an attempt to minimize respiratory diseases, feed additives have been studied. The use of yeast as additives stands out; recent government restrictions from the European Union and the United States have banned the use of performance-enhancing antibiotics in animal feed, such as monensin (SHURSON, 2018).

The use of yeast as food additives can help the rumen microbiota, strengthening the immune system and reducing pathogen contamination, also contribute to the animal’s overall health and response to the problem. When used in fragments, they supply amino acids, peptides, beta-glucans, and mannan-oligosaccharides to the rumen environment (BORTOLUZZI et al., 2018). While some of these nutrients are used to multiply rumen microorganisms, thus increasing diet fermentation, other nutrients will be absorbed. This latter event will trigger the immune response and, consequently, increase the efficiency of leucocytes (white blood cells) to combat infectious agents (WILLIAMS et al., 1996).

The yeast has been widely used in ruminant nutrition as a functional feed additive, and there is extensive literature proven its benefits. The RumenYeast® (ICC Brazil Company) is pure Saccharomyces cerevisiae yeast originating from sugarcane fermentation process for ethanol production, undergoes through autolysis (cell membrane disruption) where the intracellular content is released. The final product is highly digestible because also contains amino acids, peptides, and polypeptides of short-chain, glutamic acid, and the presence of the yeast cell wall, mainly composed by mannan oligosaccharides (MOS) and high levels of β-glucans.

Given these factors, a study was performed at the Confinamento do Núcleo de Produção Animal NUPRAN (Feedlot of the Animal Production Center), Universidade Estadual do Centro Oeste, Cedeteg, Guarapuava, Paraná, Brazil. Thirty-six unneutered steers (half Angus blood), with an initial average weight of 350 kg and initial average age of 11 months, were distributed into three treatments: Control – diet without yeast; Lev 4 – diet with yeast (4 g of RumenYeast®, by ICC Brazil, per animal per day); and Lev 7 – diet with yeast (7 g of RumenYeast®). Animals were assessed over 105 days on a feedlot.

During this period, more specifically, from day 42 in the feedlot, more animals without yeast supplementation presented nasal discharge and higher orbital temperature when compared to supplemented groups (Graph 1).

Graph 1 – Steers in feedlots, without mucopurulent nasal discharge and orbital temperature, that received different doses of RumenYeast® through the diet. 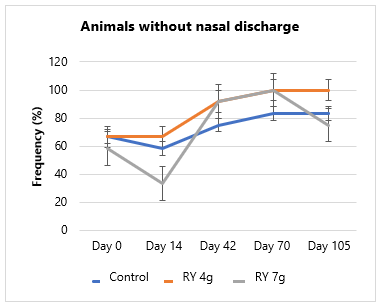 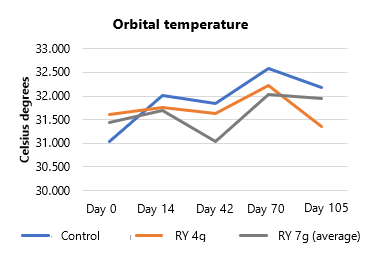 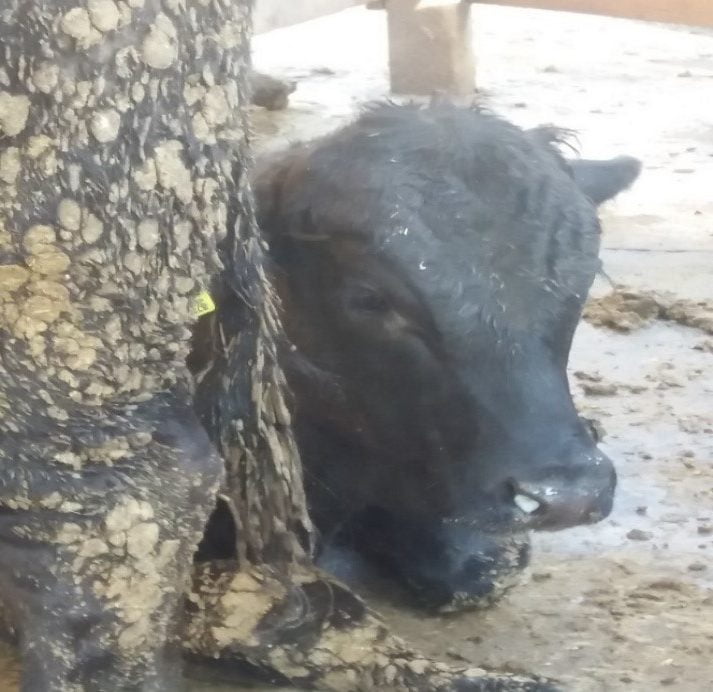 We next performed blood tests to determine whether this increase in the respiratory disease was due to decreased animal defense mechanisms. The blood cells (neutrophils) from animals that received yeast in the diet had a greater capacity to eliminate disease-causing agents. Moreover, the lungs of animals were examined on the day of slaughter (Image 2). Animals that received autolyzed yeast through the diet had less evidence of pneumonia than the control animals (Graph 2).

Graph 2 – Ability to eliminate infectious agents and the frequency of pneumonia in steers in feedlots that received different doses of RumenYeast® through the diet. 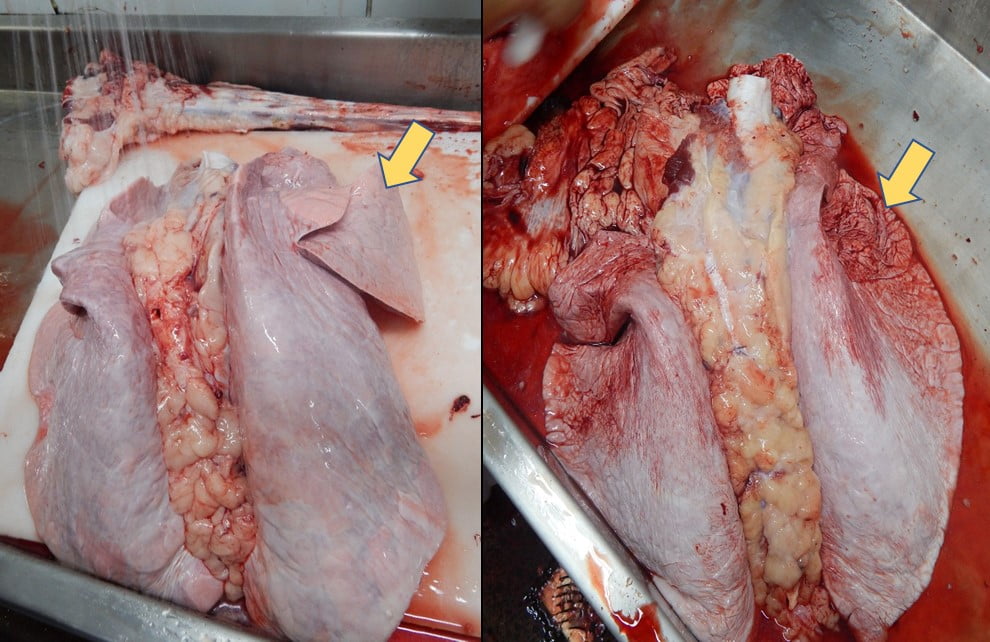 Image 2 – Indicators of respiratory disease: lungs at slaughter (arrow indicates the area that pneumonia usually occurs. In the left figure, the area (ventral cranial lobe) has no change. On the right, the reddish (congested) and flattened (atelectasis) area, indicating localized pneumonia.

These results demonstrated that both 4 g and 7 g RumenYeast® supplementation in the diet improved the lung health of the evaluated animals. However, 4 g supplementation exhibited greater efficiency compared to 7 g. This improvement in animal health may result in higher productivity, lower antibiotic costs for treating sick animals, lower bacterial resistance from incomplete treatments, and less disease transmission among animals in the feedlot.

The combination of proper rumen nutrition that strengthens the animal’s immune system results in a better and more efficient response against the challenges encountered in the field that affect the cattle, especially in the adaptation phase. RumenYeast® provides these benefits, enables quality and natural supplementation, a key factor to conquer an increasingly demanding consumer market.

SCHAEFER, A. L., et al. The use of infrared thermography as an early indicator of bovine respiratory disease complex in calves. Research in Veterinary Science, 83.3: 376-384, 2007.