The somatic cells counts (SCC) are related to the total number of cells per milliliter in milk. Primarily, SCC is composed of leukocytes that are produced by the cow’s immune system during an inflammatory process in the mammary gland, commonly referred to as mastitis (Looper, 2012). This inflammation results from the colonization and multiplication of pathogenic microorganisms in the mammary gland and a complex series of events leading to reduced synthetic activity, compositional changes, and elevated SCC in milk; the magnitude and temporal relationships of these responses vary with nutritional status, other animal factors, and the pathogen involved. However, because the elevation of SCC is a response to an infection in the mammary gland by pro-inflammatory mediators, the primary factor influencing SCC is the infection status. The effects of stage of lactation, age, season, and various stresses on SCC (Rupp et al., 2000) are minor if the gland is uninfected. Except for normal diurnal variation, few factors other than infection status have a significant impact on milk SCC (Harmon, 1994).

The predominant cell type present in milk, besides shedding epithelial cells, is leucocytes, where includes macrophages, polymorphonuclear neutrophils cells (PMNs), and lymphocytes (Boutinaud and Jammes, 2002). The macrophages are generally the predominant cell type in healthy cow milk. They can fight against bacterial invasion quickly by phagocytizing the antigen and releasing messengers that are recognized by the PMNs (also phagocytic cells) that will be recruited in the infection site (Li et al., 2014). When PMNs arrive at the site of infection, they phagocyte microorganisms and kill them by using a combination of oxidative and non-oxidative mechanisms (Pham, 2006).

The SCC in the milk naturally increases after calving when colostrum is produced before the cow starts the lactation, and tends to decrease until the end of lactation; however, it can vary due to many factors, including seasonal and management effects. Necessarily, a lower SCC indicates better animal health, as somatic cells originate only from inside the animal’s udder. SCC monitoring is essential because as the number of somatic cells increases, milk yield is likely to fall, primarily due to the damage to milk-producing tissue in the udder caused by mastitis pathogens and the toxins they produce, mainly when epithelial cells are lost (AHDB, 2018). However, a low SCC is sometimes related to an inefficient immune response, but in general terms, this is not necessarily true; it may be the case that there is merely a low level of current infection. The immune response is best measured by how quickly the immune system reacts to the disease challenge, not how many white blood cells are present before infection occurs (AHDB, 2018).

The cell counts tend to reflect a response to contagious mastitis pathogens: the Bactoscan count, on the other hand, indicates the level of bacterial contamination from external sources, such as insufficient cleaning of the milking equipment or poor udder and teat preparation before milking, and can indicate a high level of environmental pathogens (AHDB, 2018). According to the European Union (EU), the udder is considered infected when the SCC is above 200,000 cells/mL, and when the SCC is above 400,000 cells/mL, the milk is not accepted for human consumption. However, the values for milk acceptance in dairy industries varies in different countries (Li et al., 2014).

In practice, there are two methods to control mastitis in the herd: culling cows, which is a short-term solution that can quickly reduce SCC in the bulk tank; and controlling the mastitis, which is a long-term solution. The second method is based on monitor each cow monthly (with SCC records for a mastitis prevention program); improving sanitation (merely keeping the udder clean and free of pathogenic bacteria that cause mastitis); environmental conditions (bedding must be dry at all times; the grass sod in the pasture or dry lot should be free of mud and objects such as sticks that damage the udder); special care heifer management (calves should be reared in separate pens to avoid nursing; the fly population must be controlled to decrease the spread of mastitis-causing bacteria; springing heifers should be separated from cows); dry cows treatment (the risk of intra-mammary infections is highest during the early and late dry period when pathogens are not flushed out on a day-to-day basis); and nutrition to prevent the problem (nutrition is involved in maintaining immunity, and inadequate energy or deficiencies could affect animal resistance) (Looper, 2012).

One of the strategies that could be used to improve the immunity status and consequently, to decrease the SCC, is the supplementation of RumenYeast® from Saccharomyces cerevisiae which is composed by the yeast metabolites and the cell wall (rich in mannan oligosaccharides [MOS] and β-glucans). The metabolites derived from the yeast fermentation are an excellent substrate with nutrients that modulates the ruminal flora, speeding up the digestion of cellulose and hemicellulose, aiming benefits to bacteria and protozoa, stabilizing the ruminal pH, and increasing the production of VFA’s (Dias et al., 2017a,b).

MOS, as mentioned above, are also structural components of the yeast cell wall, and are known for their pathogens (that has type 1 fimbria) agglutination capacity, such as diverse Salmonella and Escherichia coli strains. MOS offers a binding site for pathogens, preventing the colonization of the intestinal epithelium, and these agglutinated bacteria will be excreted together with the indigestible part of the fiber.

According to Dias et al., 2017 (a), RumenYeast® reduced the blood haptoglobin concentration, which is an acute-phase glycoprotein produced by the liver during inflammatory processes; in this case, caused by the high level of starch in the diet. Different field trials have shown the decrease in SCC around the world (Table 1). 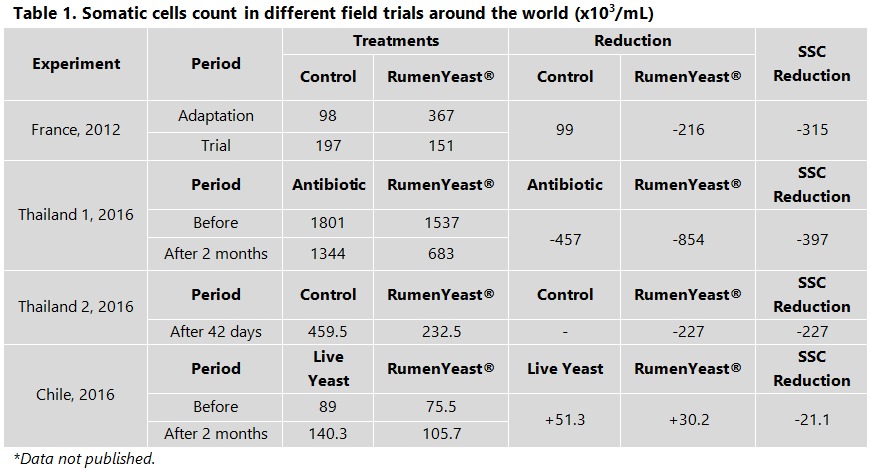 Several studies have shown that RumenYeast® could increase the milk production by +2 kg/cow/day and milk quality (fat and protein), decrease SCC and diseases incidence, and also the mycotoxin contamination in the milk. The combination of proper rumen nutrition with the strengthening of the animals’ immune system means higher daily milk production, besides reducing to zero the concerns about any residues in the milk, a key factor to conquer an increasingly demanding consumer market.