Poultry production systems are highly challenging. They are affected by environmental factors like temperature, ventilation, population density and other stressing agents (Rocha et al., 2014). Additionally, pathogens and mycotoxins are constantly present, which may reduce or affect the immune response of broilers.

It is important to point out that these innate immune system responses require a large number of nutrients and, especially, metabolism energy, as it is an unspecific and pro-inflammatory response, but necessary to control proliferation, invasion, and damages caused by the antigen in the animal. However, an extended pro-inflammatory response can lead to secondary diseases, immunosuppression, maintenance of immune homeostasis, intestinal dysbiosis and, finally, reduced performance and mortality.

In addition to modulating different physiological processes, including nutrition, metabolism and pathogen elimination, the intestinal microbiota of animals can change the physiopathology of parasitic diseases, conferring resistance or promoting enteric parasitic infections and playing an important role in regulating immune system response. Bacteria naturally found in the gut act as molecular adjuvants, providing indirect immunostimulation, helping the body protect itself from infections.

Saccharomyces cerevisiae (ImmunoWall®, ICC Brazil) yeast cell wall, originated from the sugarcane fermentation that produces ethanol, contains approximately 55% of total indigestible carbohydrates; 35% of them are β-glucans (β-1.3 and β-1.6), and 20% of them are mannan oligosaccharides (MOS). β-glucans are recognized by phagocytes cells (Petravić-Tominac et al., 2010), which trigger an innate response that helps the animal modulate its immune system. MOS can agglutinate pathogens that have type 1 fimbriae, such as several strains of Salmonella and Escherichia coli.

A recent study by Beirão et al. (2018), where broilers were given ImmunoWall® (0.5 kg/ton) and infected at 2 days old with Salmonella Enteritidis [SE] (orally at 108 CFU/broiler), showed that at 4 and 8 days old (two and six days after infection, respectively) ImmunoWall® had reduced marker passage (Dextran-FITC, 3-5 kD) to blood in challenged broilers. These results show a significant improvement in intestinal permeability, as SE can stick to the mucosa through its fimbriae, produce toxins and damage tight junctions and enterocytes, invading them and moving to the bloodstream and other organs and tissues (Figure 1). 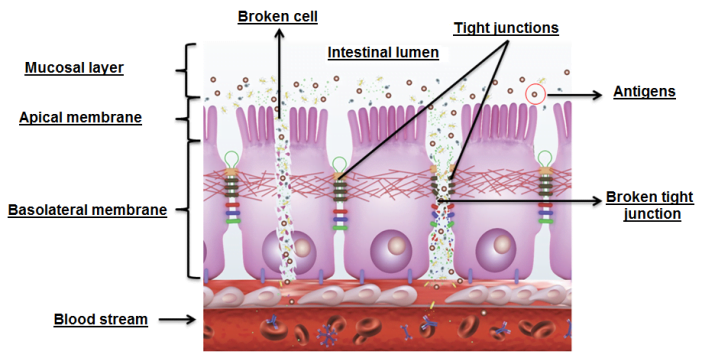 These results can be explained by the quantification of circulating cells analyzed in the blood withdrew from these broilers. It is important to note that during a normal infection process, blood leukocytes are taken to the gut. However, if the animal has another type of infection, reduced total circulating leukocytes can impair response to the attack to this second antigen/site. This can be especially dangerous when total leukocyte blood levels are very low (leukopenia). In an analysis conducted in the study mentioned above, the group infected and supplemented with ImmunoWall® had reduced blood leukocyte mobilization to the gut at 14 days. However, when this immune system is subdivided, and different cells are analyzed, animals in this group have more APCs, suppressor monocytes (that prevent an uncontrolled immune response) and helper T lymphocytes (CD4 – they produce interleukins and stimulate the multiplication of cells that will attack the antigen) compared to the group of untreated challenged animals. The group of unchallenged animals given ImmunoWall® showed intermediate responses (between the challenged and the unchallenged control) to the analyzed cells mentioned above, in addition to cytotoxic T lymphocytes (CD8), which are important to prevent or control Salmonella invasion, as they can invade monocytes and then move to the liver and other organs.

Chart 1 below shows that supplementation with ImmunoWall® resulted in higher production of anti-Salmonella IgA at 14 days old. This indicates that the immune system had a quicker and stronger specific response, using less energy and nutrients, as the inflammatory response seemed to be shorter.

SE can be a problem to broilers that still do not have a mature immune system, as they cannot fully control the infection. For this reason, most of the improved responses found in this study were observed up to day 14. Therefore, β-glucan supplementation can help broilers activate the immune system and have an early and quicker innate immune system response, reducing/minimizing the damages caused by pathogens and, consequently, performance impairment. This type of response is especially important in animals at early development stages, during reproduction, periods of stress and environmental challenges; acting as a prophylactic agent and increasing animal resistance, thus minimizing losses.

Several other studies have confirmed the efficacy of ImmunoWall® in reducing pathogen contamination in broilers and eggs (Hofacre et al., 2017; Ferreira et al., 2014), reducing mortality and improving productivity (Bonato et al., 2016; Rivera et al., 2018; Koiyama, et al. 2018), especially under challenge. There are no feed additives that can solve problems related to management, health plan, immunization, nutrition, water quality, among others. Additives are tools used to help control and prevent them. Intensive animal production is known to be extremely challenging. Therefore, strengthening the immune system can be one of the keys to higher productivity.